A short form tabletop roleplaying game where you play to find out the fate of a paramedic crew in a near-future Californian coastal metropolis. 3-5 players.

Blades in the Dark & Lady Blackbird, by John Harper

The works of early William Gibson & Bruce Sterling, & their many sprawling, brawling children,

Bringing Out the Dead, both the book by Joe Connelly & the film by Martin Scorcese,

In order to download this Roleplaying Game you must purchase it at or above the minimum price of $10 USD. You will get access to the following files:

Support this Roleplaying Game at or above a special price point to receive something exclusive.

If you don't have the scratch on hand to buy a copy of this game, worry not friendo, your crew has your back. Every sale contributes more copies to the pool.

Absolutely phenomenal work. As a former EMT, I can attest that the gameplay presented here is hardly an exaggeration of what it's like running a privately-owned, profit-driven ambulance. Forged in the Dark works incredibly well here, and I love the use of the card deck adding an extra layer to the probability mechanics, because shit ALWAYS hits the fan sooner or later during a shift. Love the Cyberpunk edge as well. Overall this is a fantastic work, and I can't wait to show it to my home group!

That means a lot to me, thank you!

Hi, I would like to make a proposal to translate Crash//Cart into Korean.

Could you check the yourtwitter DM?

I will check, but the answer is definitely yes!

Hi, Have you check the DM?
If you let me know your contact e-mail, I will send you our contract template.

If you have any question, please let me know.

Hi is there any chance we can see a fresh batch of community copy? I am terribly sorry for asking.

We can! Thank you for reminding me.

Thank you so much !!

Is there any way that the clients and crewmembers sheets could be reformatted so that only one client is on a sheet or, in the cast of the crew, the letter comes on a separate page?  It prints too small otherwise to be readable.

Sure thing! Would you like individual pdfs or jpegs in a folder?

I'm uploading a .zip file of every individual sheet right now. Please let me know if you have any trouble with it, for a cyberpunk designer I'm pretty unhandy with a computer!

They're all there but the writing it often kind of washed out so hard to read.

I've learned quite a bit since then about making cleaner sheets, bear with me and I'll get you better ones sometime soon, I promise!

Could your two games benefit from a cross-over ? I don’t know, but the link is obvious. https://nickwedig.itch.io/medical-bay-three

Did my first play-test over the weekend; a lot of fun!  The crew barely got to the hospital before the nanites inside the patient made them ineligible for Crash//Cart service and a nightmare for Legal!

We decided to allow face card draws to be put in -any- player's cache; otherwise we felt that the card specific abilities happened too rarely to be worth taking, especially during a one-shot.

The character sheets look amazing (in general all the graphic design work is solid; in particular the flow chart for cards on p. 12], but sometimes the font is too small to read easily - see the list of vices/trauma as the biggest example.  It's also hard to print in booklet form.

I'd love a more robust set of patient charts/complications/medical issues; since there are currently 3 themed ones, I worry it might become a bit stale if you're playing the long game.

This is excellent feedback! It has increasingly become obvious that most groups draw at radically different speeds, and that I need to provide some dials to accommodate that fact.

As for more clients, I'd love to see what you've come up with! I've got some more almost ready to drop, and would be thrilled to just keep increasing the roster!

My online gaming group and I are really interested in trying this out! Are there any tools or suggestions for playing this online? We currently use Discord, Roll20, Foundry, and TTS (for other boardgames).

Roll20 would be an excellent idea! Your request got me looking into it, and I have put the word out looking for someone to build the sheets.

I'd consider working on this for FoundryVTT, if I had your permission to use the art. Now that the latest version supports cards natively, I think it would be a good fit. I've already done Scum and Villainy and Band of Blades so far.

You absolutely have my permission! This is a project that I will support in every way that I can.

Sweet, it might take awhile, as it's a hobby project and I'm not a software developer by training or profession. If you're willing to provide active support, it would be helpful to get any raw graphical assets you're willing to share to avoid attempting to screen cap them out of the PDF. I'm better at the under-the-hood coding than any visual artistry, so any leg up will help a lot. You can reach me at my username at Gmail. 👍

Looking forward to playing this but have had a tough time printing out the character sheets because they are two-page spreads. Any chance we could get an updated single-page version so they can be printed back to back?

Yes! I'll be revisiting this project in August, and am happy to make any changes that make play easier!

Sounds good. Playing it tonight! I'll drop a note here with the feedback I have.

First, I love the graphical look and the premise. It's what convinced me to buy! We played a one-shot and here are some of my suggestions for refinements:

Both the character sheets and the rules text have a mix of single page and two-page spreads. (The EMV is a one-page spread but then the rest of the PDF has both the full page for the Employee AND the full page for the post-mission Forms on the same spread.) This makes it extremely tricky to print. Each standalone page should be in its own spread. Also important for the rules PDF, which can't be printed as a booklet in the current layout.

I like the look of the distressed font you used for the character sheets, but even using the printer-friendly version, it ends up being difficult to read at the table. (My players are all over 50 and have tired eyes.) I'd suggest updating this font to one that is bolder, with stronger definition.

Finally on the gameplay front, I was really interested to see how Forged In The Dark worked with a deck of cards instead of dice. By the end of the session, my players really struggled with it. They pulled a lot of failures and none of them got to activate one of their special abilities using a face card from their cache. (With three players and only two Queens in the deck, there's about a 2-in-3 chance on any given pull that the Queen you need to activate Borrowed Time is going to go into another player's cache and that player may not even have the Queen XP ability chosen).

I think the other issue with the mechanics here is that in a game with dice, when you roll a result of 2,4,5,6 the next time you roll you have the same odds of rolling a 4 or 5. In this design, those Partial Success results go to the trash and are essentially wasted if you pulled a face card. I know it's a game of diminishing returns but by the end of the mission the players essentially ran out of black cards and were frustrated by failure after failure. It is possible that I may have a GM style that calls for more rolls than your average Forged In The Dark GM and therefore I burned through more cards than usual.

All that said, I really love the premise of this game and it looks terrific. There's some great dystopian cyberpunk worldbuilding in here as well.  Personally I am keen to play it again. I suspect I'd revert back to the usual dice pool mechanics and if not, I'd definitely let players pick three or four Employee abilities and shuffle in the red face cards if I was playing a one-shot just so there would be a better chance of their abilities triggering.

Hope that is useful feedback!

Thank you! Watch this space. More material is coming in 2021.

Wanted to point out that when I downloaded the most recent version, the client and crewmember sheets weren't included.

They should be available for anyone to download freely in the DEMO section, please let me know if there's any trouble with that and I'll make sure that you get them!

I can get those fine.  Thanks!

Excellent! Watch this space, there are more crew, clients & other goodies on the way!

A fabulous breath-of-fresh-air premise and a really clever twist on the Forged in the Dark mechanics.

It falls in the rare category of games which I see, read, decide I need to play sooner rather than later and then actually follow through and bring to the table the same week. Bravo.

Thank you! This means the world to me.

CrashCart is the best game premise I've heard in 2 years.

CrashCart is an incredible evolution of the Forged in the Dark system. Your quickly dwindling stack of cards adds even more tension to the pressure cooker of trying to save people, avoiding predatory corporate powers, and keeping your damn GEV in the air for one more night.

I knew CrashCart was going to be pretty and I still wasn't prepared for exactly how pretty it would be. I opened it and was gobsmacked! Galen's put together a solid playtest edition that has a cool, card-based approached to Forged in the Dark gameplay. Looking forward to giving it a closer read soon! 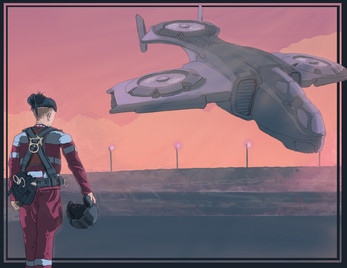